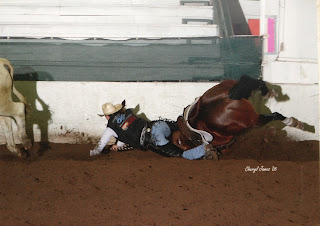 It’s common to come across people with varying levels of fear regarding their horses. That fear can range from mild to severe and can affect training and competition. In some cases it prevents people from doing the one thing that they love most: ride. It may surprise you to know that I am not a risk taker or an adrenaline junkie. The only place where I have ever wanted to take risks is on the back of a horse. My parents have often expressed how surprised they are that I train and compete in cow horse competition because it goes against my nature. The fence work in competition is very fast and the turns are quick. I have had a couple of wrecks when horses have lost their footing and sustained many injuries during my career as a trainer, but have been fortunate to have never been critically injured. However, I know about fear.

I have experienced it up close and personal. About 6 years ago at a futurity, I watched a competitor I knew get killed during fence work. The memory is still vivid: the horse tangling feet with the cow and stalling mid-roll, feet in the air, its saddle in the middle of the rider’s back. I have not been able to erase that image from memory. For many years, there wasn’t a time I turned the corner to take a cow down the fence that it didn’t flash through my mind. It was a long road to getting over that fear. In the same year, another prominent cow horse trainer lost her life as she was slammed into a wall by a horse. It was a tough year for our industry. Most people’s fears are simpler than those extreme, specific examples, but it still boils down to fear of injury. The reality is that horseback riding is considered an extreme sport because horses are large and powerful. All horses are athletes by nature, and they are driven by flight or fight responses. Fear is nature’s way of protecting us from danger. It serves a very important purpose and shouldn’t be ignored. However, horses feed off of fear and when the rider/handler is fearful it makes things worse.

The fear I often hear described stems from a lack of understanding and a fear of loss of control. These same people are all too often matched with a horse that is way out of their ability level. They also lack tools to approach problems logically and safely. They understand that trust is important, but they don’t know what that means, or how to find that bond with a horse. One of the things that helped me begin to overcome fear was to learn to trust my training and my horse. I realized I could feel confident in my ability to control or react to most situations. Fear of the unknown is something that can be remedied with time and experience. A tougher fear to overcome is that which comes after an accident. Even the most experienced horseperson can struggle to come back after a wreck as they discover they now lack confidence in a place where they once felt at home.

In my line of work, I expect a certain amount of being beat up. I have been kicked, dragged, bucked off, fallen on, rolled over, bitten, and had a pitchfork kicked into my face. I have many portions of my body where there is literally no feeling. When I encounter a familiar situation where something negative happened, alarm bells go off in my head. Percentage-wise, for the number of rides I have put on horses over the years, I have been very fortunate. I believe that a lot of that is because I am a risk minimizer by nature and learned from each experience. “Alarm bells” are there to keep us safe; our education is there to tell us what to do to prevent or deter a situation. Some of you might be thinking of a terrifying memory or specific fear—realized or not—while reading this. It is foolish to think that you will never get a bruise from your horse, but I promise that if you truly can’t live without horses in your life there is a way to deal with fear.
Posted by Coastal Equine at 9:48 AM 2 comments:

Training Thru Trust: Starting the Performance Horse with Kade Mills 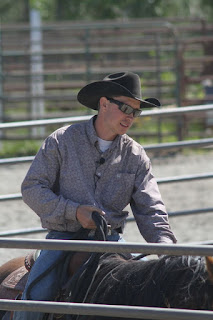 There is no arguing that a horse’s introduction to training, his start, is crucial. This is the time of year that 2- year-olds across the nation are beginning their journey to become show horses. I have strong beliefs about initial training and was thrilled to meet a guy who not only does a fantastic job of colt starting, but also clearly articulates that to an audience. I asked Kade Mills to talk to us about his program and approach to starting colts and this is what he had to say.

I think that having a solid philosophy is key to starting colts. A performance horse is no different than any other horse in the beginning. Any horse that is started properly will thrive based on his individual talents and abilities once he is put to a given
discipline. Many people believe every horse is different, others say a horse is a horse. I find most horses will fall in to two general categories, timid and dominant. Understanding and recognizing the difference will help the conversations between horse and rider go smoother. My philosophy, or direction, will remain the same, but my approach to things will change depending on which category a horse falls into. The timid horse will always be the easiest to read. They instantly show respect for personal space. A timid horse will not fight for title in the natural pecking order with the herd or with people. A dominant horse will want to challenge personal space by trying to move the person. He will seem pushy and will seek higher position in the pecking order. Regardless of the type of horse, my goal is always to create the same balanced horse in the end. To accomplish this, the two things the relationship must be built on are trust and respect. With the timid horse I will spend a lot of time building trust, and the respect comes rather naturally. Dominant horses will build trust fast and then I can begin working on respect. A timid horse will take a lot of time in the beginning, but will make up time when I have his trust. A dominant horse will catch on quick and then use his dominance to be resistant.

To gain trust and respect I use very clear cues. All horse training is based on cues that originate from a pressure and release system. A horse that truly understands pressure is very easy to teach. I want them to understand to move or give to it and not react to it. The pressure can come from a rein or a leg, and with timed release we show them a pattern we can follow for the rest of their life. However, it is important to remember that it is not only building cues. The manner in which cues are delivered is what solidifies the relationship of trust and respect. My horse’s reactions will reflect my delivery of pressure. If I am fast and abrupt, my horse will be fast and abrupt; if I am dull with steady pressure, my horse will be the same. I strive for a happy medium in my delivery and focus more on the building of pressure and the timing of release. I build my pressure on a scale of 1–10, 1 being the lightest pressure possible and 10 being strongest. I teach my horses I will always begin at a 1 and build until I get the desired response and then release. This is an easy way to motivate a horse to stay soft. If my pressure starts to climb to the top, I build my pressure slower the closer I get to 10. This allows me to stay mentally connected while adding pressure, and helps ensure I don’t miss the timing with my release. If the horse can respond to light pressure and we give them that chance he will start to become willing and develop “try.” Through this foundation, I have created a horse that is trainable. Now I can begin to train him. NWHS

Kade Mills has worked as a professional horse trainer since he started homeschool at age 15 to work with his father, well-known horsemanship clinician, Doug Mills. Kade made his mark in Trainer’s Challenges. Winner of both  Mane Event  Trainer’s Challenges in the past year, he credits his success to the “Training Thru Trust” program that his family practices. It’s a very easy program to teach and implement, and remains a crowd pleaser because of its black and white results.
Posted by Coastal Equine at 11:21 AM No comments: